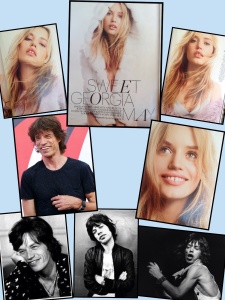 As a teenager my bedroom was adorned with posters of the one and only Mick Jagger! Admittedly, I still have a thing for him…not exactly sure what it is? He’s not exactly handsome? Maybe it’s his lips? Now decades later his youngest Georgia May, has made a name for herself as a high fashion model. She has graced many catwalks and has done campaign ads for Rimmel, Versace, Chanel, and Hudson Jeans (one of my favorite denim lines!). An impressive résumé despite her gaped tooth smile (a.k.a. Diastema, ok I know the technical term, I have a dental background). In our society of gleaming white, cosmetically enhanced teeth it’s nice to see someone who isn’t cookie cutter perfect be accepted as beautiful!

Yes that is my collection of Hudson Jeans!